No, he doesn’t make them workable again and he doesn’t even throw them in the landfill. He collects them and creates a sculpture out of it. The cow sculpture shown above is known as Pasture Bedtime and is created from 2000 watches and clocks. The sculpture has been sold in an auction for $11,500, and a part of the earnings have been donated to American Family Children’s Hospital.

The sculpture’s cost is something that leave many jaws locked. But considering that it’s an artwork, the cow doesn’t seem expensive for those who love cattle but don’t want to get messy by owning a real one.

source: http://www.ecofriend.org/entry/eco-arts-artist-creates-cow-sculpture-from-recycled-clocks
Posted by Unknown at 1/31/2009 08:38:00 AM No comments:

The Domo Kun on the left is done with the Korean brand of air-dry clay. Mix Orange and Black to get the Domo Clour. Domo!!! 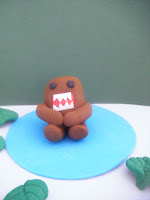 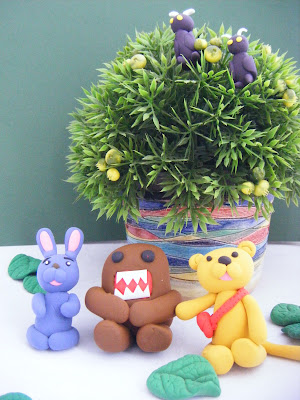 Domo (どーもくん, Dōmo-kun) is the mascot of Japan's NHK television station, appearing in several 30 second stop-motion sketches.
Domo, the main character, is described as "a strange creature that hatched from an egg." Domo's favorite food is Japanese-style meat and potato stew, and he has a strong dislike for apples, due to an unexplained mystery in his DNA. Domo can only communicate via producing a low-pitched noise which sounds somewhat like his own name, but other characters appear to understand him. Domo-kun is known to pass gas repeatedly when nervous or upset.

Domo lives in an underground cave with Mr. Usaji, known in Japanese-language versions as Usajii (うさじい, Usajii?), a portmanteau of the words usagi (うさぎ, usagi?), (rabbit), and jii (じい, jii?) (old man, grandpa). Mr. Usaji is a wise old rabbit who loves to watch television and drink astringent green tea. Mr. Usaji is not into any "new" materials, and does not own a telephone. In terms of fashion, Mr. Usaji focuses on materials instead of shapes. Mr. Usaji's favorite food is carrots, and his least favorite food is "something that is meaningless."

The other main character in the shorts is a weasel girl named Tashanna.(Tā-chan (たーちゃん, Tā-chan?) in the Japanese version). Tashanna, 17 years old, is a weasel who aspires to be a fashion stylist or model in Tokyo and is always using technology (televisions, mobile phones, and cameras). In English Tashanna has a "weaselly accent" (いたちなまり, itachi namari?) and ends her sentences with "y"s. In the Japanese version, she ends her sentences with "chi" (ち). According to the English site, she is also looking for a boyfriend. Tashanna's favorite food is apricot and mint tarts, and her least favorite food is sea urchin.The Japanese name originates from the word "multichannel" (多チャンネル, tachanneru?) of digital broadcasting. 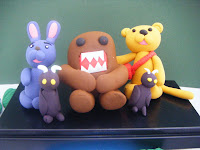 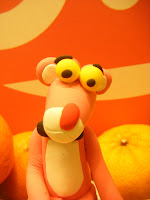 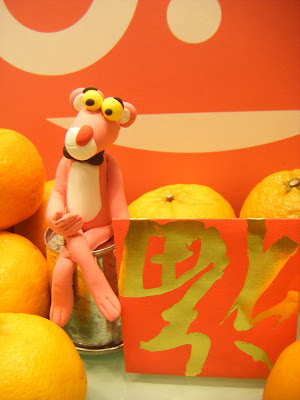