Singapore is a multi-racial society and we do celebrate quite a number of holidays here :-) For the Muslims, 18th of August is the end of their fasting month and it is also followed by a time of forgiveness, both horizontally and vertically. It is marked by improved family ties and feasting with friends, A culural symbol is the ketupat decor - ketupat is a type of rice packed in a palm leaf and specially woven in a distinct manner. Ketupat is frequently eaten with grilled meat - known as Satay in this region. I made this ketupat decor and pasted it (without the bird) at the corner of my TV and friends say it is nice. 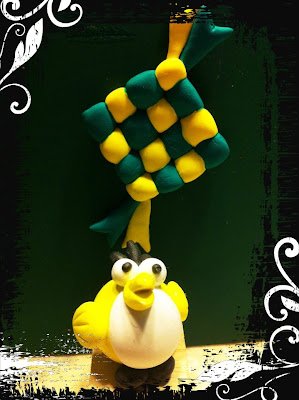 ++++++++++++ How to do ++++++++++++ How to do this ketupat? It is easy. Just take two colors from your Paulinda clay container, yellow and green. These are Colours which Muslims like very much - it's their cultural colours. Green represents the unviversal colour of nature and life. Yellow is a nice complementary colour. Once you hear the secret you will be surprised: Roll out a line of green and yellow of equal size. Cut the clay into equal sizes and roll them into spheres. Round balls. And join them in alternate colours. Tada!!! Just add a simple ribbon on the top and bottom. Easy? Now get out your craft mat ;-)
Posted by Unknown at 8/31/2012 06:12:00 PM No comments: 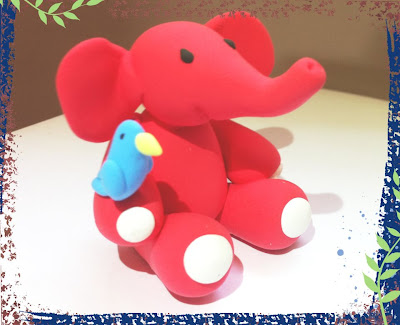 The continuing saga of the TOILET SEAT

The toilet seat is a good subject and prop for many funny clay pieces i'm sure. Rodin's "The Thinker" started that. I'll leave the rest of the imagination to your good self! 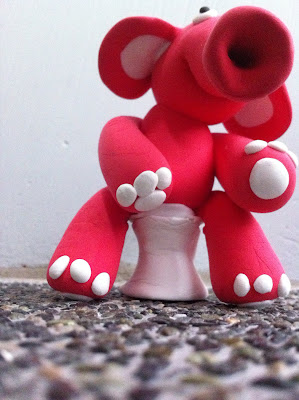 Ingenuity strikes when we are in a reflective mode, where we take time to see life in a measured pace. Take this white toilet seat, made of two materials - plastic and clay, for example. A leisurely breakfast in the morning caused my eyes to see another use for a non-recyclable item. Guess where it is taken from? 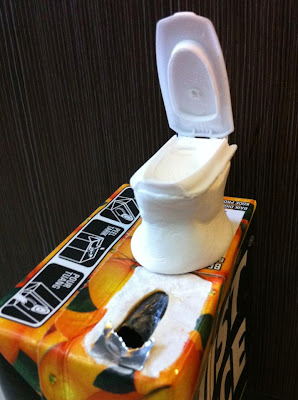 Well, no prizes for guessing it right as i have already done the work for you. I have also recycled many things in the process of creating my clay works - either as armatures or props. I want to drive home the message that a reflective life is a creative life ;-)
Posted by Unknown at 8/29/2012 06:08:00 PM No comments: