Eeyore's here for a picnic! 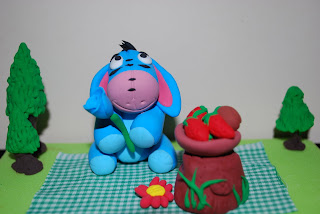 Eeyore is a character in the Winnie-the-Pooh book series by A.A. Milne and the Walt Disney Company franchise of its cartoon adaptation. He is generally characterized as a pessimistic, gloomy, depressed, old grey stuffed donkey who is a friend of the title character, Winnie-the-Pooh. Eeyore's best friend is Tigger.

His name is derived from the British pronunciation of "hee-haw."

Eeyore also appears in the Winnie the Pooh cartoons popularized by Disney studios. In merchandise by The Walt Disney Company, Eeyore sometimes has an uncharacteristic smile. Also, he is somewhat less caustic and sarcastic in the Disney version than in Alan Milne's original stories.

His tail was not always fixed to him by a nail, although Disney has chosen this as part of his permanent image. Eeyore lost his tail in the Hundred Acre Wood. Owl found it and used it as a bell-pull beside his door, before Winnie-the-Pooh found it for Eeyore. Christopher Robin then pinned it back on. According to Winnie the Pooh and the Honey Tree, this was possible because Eeyore is full of sawdust. Also, when Eeyore appears in animation he is colored his natural grey, though he is coloured blue with a pink muzzle in merchandising.

The Classic Trio ~ With a Classic Green Twist

Do you know that the three monkeys with the classic poses "see no evil, hear no evil, speak no evil" originated from Japan? Well i just found out.

The source that popularized this pictorial maxim is a 17th century carving over a door of the famous Tōshō-gū shrine in Nikkō, Japan. The maxim, however, probably originally came to Japan with a Tendai-Buddhist legend, from China in the 8th century (Nara Period). 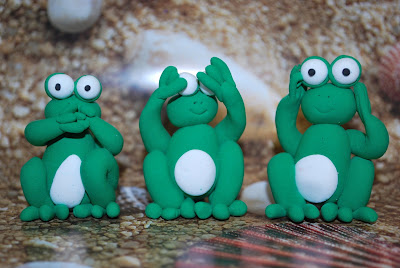 Well, i like the poses but gave it a greenish twist. It can be customised and packaging is available.

Today is Sunday, April 12, 2009. It is also Resurrection Day - The day when Jesus rose from the dead two thousand years ago. An empty tomb proved he's risen. Easter Sunday is what many people would remember today, but the real Easter is not about Bunnies and Chocolates, even though it's fun to have our lives filled with them.

For me, it's the basis of my faith.

There's a beautiful video with an equally beautiful song of the life of Jesus. Watch it here:


The format of my blog is a little changed, in the spirit of Resurrection Day.